Ahmad originally called Ada West Dermatology for chronic urticaria— which is hives, those itchy red or skin-colored welts. They aren’t contagious, they are not an allergy, and they are often caused by a combination of factors including the environment, the immune system, and genetics.

Ahmad explains how he endured this for about 6 months. “They would get extremely itchy and almost paralyzing and I couldn’t do anything and nothing would stop it. You know I was on several different types of antihistamines and steroids and there was so much medication I couldn’t keep my eyes open anymore. .. It would just hit and take several hours to subside. It was crazy.”

A friend who works (still) at Ada West Dermatology suggested he see Dr. Burr at Ada West Dermatology. Dr. Burr worked jointly with 2 of Ahmad’s other providers to determine his reaction was coming from H. Pylori bacteria in his upper stomach lining. The treatment was simple for that— a 10 day course of antibiotics. He felt better and his chronic urticaria (hives) were gone.

Then the severe swelling started 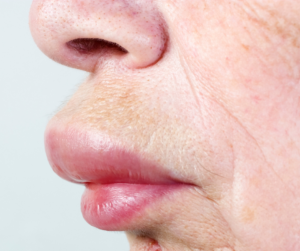 This is an example of angioedema – a reaction similar to hives that affects deeper layers of the skin. Symptoms include swelling, especially around the eyes, cheeks or lips.

Unfortunately, Ahmad’s need for medical help didn’t end there. He began to suffer from angioedema — which is an overreaction of the immune system to some kind of stimuli— for Ahmad (as well as many patients), the specific trigger was never pinpointed. Which can be frustrating. “My eyes, my lips, my tongue, or my throat would swell up and it was basically random… Sometimes half my tongue down the crease, half it would swell up to the point that my tongue wouldn’t fit in my mouth,” he explains.

Angioedema is usually harmless; however, it becomes a life-threatening emergency if it causes swelling in your mouth or throat and problems breathing. Triggers often remain a mystery.

Ahmad had been seeing a doctor outside of Ada West Derm, but decided to get help from us again. The case was transferred to Laura Allen, PA-C. She worked with staff to create a procedure to use Xolair to control the angioedema.  Ahmad explains his relief, “I went from taking literally a handful of medication a day to 1 injection a month. It was incredibly liberating.“

Before getting these monthly injections, Ahmad was on 3 kinds of antihistamines, steroids, and painkillers which left him very sleepy. “I would literally just pass out… As a matter of fact I fell asleep drinking a 4 shot espresso….It was awful.”

A word from our team of providers

Christine Measham, MD, FAAD, says that sometimes patients can present with a common or obvious diagnosis, but not respond to the usual treatment. Then we try an uncommon treatment—perhaps several. She says, “On those occasions it can be frustrating for the patient, but as a dermatologist, our message is ‘Hang in there. Don’t give up. We’ll find something for you.’ “

Dr. Measham adds that, even then, it is possible the treatment side effects can be almost as serious as the problem itself, “We work alongside the patient to help educate them, so they can decide for themselves what works best.”

Ahmad does take time to see if he can find the trigger to the angioedema, and one of them he feels is stress. He says he is able to go about 2 and half months before the random swelling returns.

Dr. Pitt, who has been a part of Ada West for decades knows the benefits for patients when their providers work alongside other board certified dermatologists.  “For difficult cases we have the benefit of numerous colleagues with other opinions and the chance to confer.” he explains.

“I think the team here did just a really great job. And more than anything, besides their professionalism, their sense of empathy towards patients,” says Ahmad. “When I came here they all made me feel like I mattered.”

You do matter, Ahmad!