Melanoma and the return of a smile 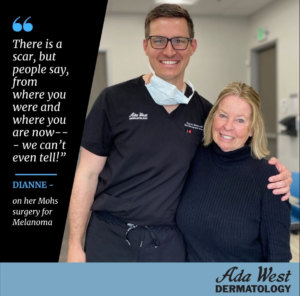 Dianne talks about her experience with Dr. Thorpe and melanoma

Dianne Osborne was not a stranger to skin cancer, she had had some basal cell carcinomas removed a couple of times in the past, but she had never had a scare like the one she did last year. During a routine skin check with Dr. Randall Burr, the spot on her lip was looking worse and needed to be checked. Using the in-house lab, the biopsy revealed the spot of concern was melanoma, the most deadly form of skin cancer.

Dr. Burr called Dianne that same day and urged her to get it removed immediately.

That next week Dr. Thorpe performed Mohs micrographic surgery to remove the skin cancer. During Mohs surgery, thin layers of cancerous skin are progressively removed and examined until only cancer-free tissue remains. It leaves as much healthy skin intact as possible to minimize scarring and help the patient recover quickly. With Dianne, two layers needed to be removed during the surgery to remove all of the cancerous cells.

Dr. Thorpe explains, “When I came across Dianne’s case, the first thing to consider is the diagnosis itself: Melanoma in situ (in-sigh-too). This means the cancer is only in the first layer of the skin called the epidermis and that, in theory, Dianne is curable with local surgery and does not need chemotherapy, bloodwork, or even x-rays. After that, the challenge is to retain lip function. I want her to be able to eat, drink, talk, open and close her mouth normally, and sleep without drooling. This can be very challenging with such a large defect. Additionally, it is important to me that she is able to look like herself and feel good in her own skin. She was losing a lot of the right upper cutaneous lip, almost all of the right upper vermillion lip, the white roll, much of the cupids bow and part of the philtrum. All of those factors go into my head with Mohs surgery cases.”

It’s no coincidence that Dianne ended up with one of the mostly highly trained micrographic surgeons. Ada West Dermatology is proud to find and recruit the best of the best — including Dr. Ryan Thorpe. Dr. Thorpe trained under the direction of world-renowned Mohs surgeons Drs. John Zitelli and David Brodland in the Mohs Surgery, Cutaneous Oncology, and Facial Plastic and Reconstructive Surgery Fellowship. Before you have a Mohs procedure done, ask your surgeon to see if they are trained and certified in a rigorous ACMS fellowship with the highest standards of quality and competency.

“I just think Dr. Thorpe– his faith–helped me as well as my faith helped me. He was just kind, skilled and very much in control of what he was doing. He was a good listener. He wanted to know how I was feeling. It mattered to him,” says Dianne. “And now it’s like you wouldn’t know I’ve done it. If you see the before and after picture you’ll see it was a miracle. That’s along with God’s healing.”

“I have one scar on my lip, so part of my lip is gone. There is a scar, but people say, from where you were and where you are now— we can’t even tell!”

“It’s frightening because melanoma is very serious. You can’t pretend it’s not going to happen to you or it’s not serious,” Dianne admits as she remembers how fear gripped her through the diagnosis. “What makes me cry is that he (Dr. Thorpe)  and Dr. Burr saved my life.”

To protect herself now, Dianne wears hats, sleeves, sunscreen, and tries to avoid sun exposure by working in her yard early in the morning before the UV index climbs. She says, “I would tell anyone else who loves to be outside, wear sunscreen. Growing up I never wanted to wear sunscreen because I didn’t like chemicals on my skin, and always wanted to go with a more natural approach, but now I wonder if I wasn’t doing the right thing. And then I didn’t wear hats like I should. I wore a ball cap– but that didn’t protect me.”