Mohs on the nose: Susan’s Story 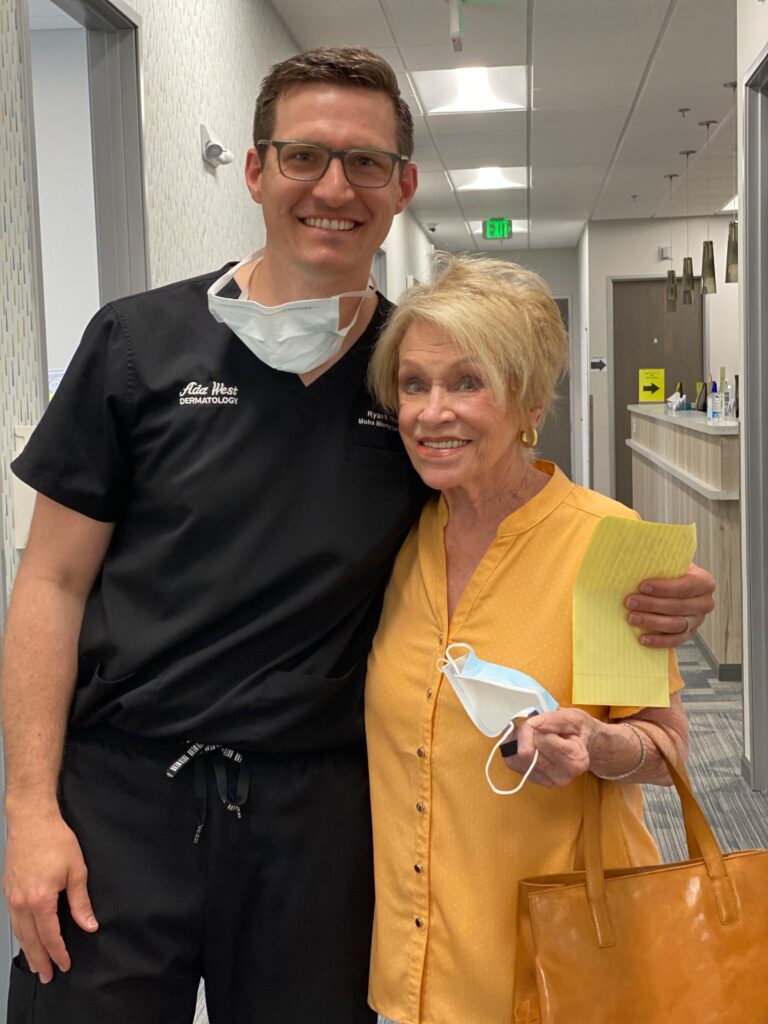 Susan Drew meets Dr. Thorpe who performed Mohs surgery on the tip of her nose the year previous.

Sometimes skin cancer can appear so tiny, but actually be growing much bigger underneath the surface. For example, the skin cancer Susan Drew had removed appeared as the tiniest little bump on the end of her nose. New to Ada West Dermatology, she said her previous physician had waved that little speck off as nothing to worry about. However, when Dr. Ryan Thorpe, MD, FAAD, biopsied the tissue, he found infiltrative basal cell carcinoma.

As Dr. Thorpe explains, “That type can be fairly insidious. It can grow beyond what you can see. By the time you know there’s a problem often they’re a lot larger ‘cause they can grow, not necessarily just on the surface, but actually can grow like a scar. Basal cell carcinomas can eat skin, muscle, bone, cartilage. I’ve seen them bigger than softballs. But they’re slow growers. They are problems that take years, not days or weeks to be a problem. As long as you’re seeing a dermatologist, they know what to look for and they’ll be able to find it before it becomes a problem. Her (Susan’s) cancer in particular had been there for years and by the time it got to me, it was pretty much her entire nasal tip, but we knew what to do to help her. Though it was certainly probably bigger than she was planning on, I think the outcome was good.“

Susan and her fair skin are no stranger to basal skin cancer, so she was not worried, however, she was shocked at the amount that needed to be removed from her nose.

As Susan tells it, “I was so pleased. He fixed it! I wouldn’t have a nose. It would be gone. I was lookin’ real ugly, but boy it turned out good.”

Ada West Dermatology uses a technique called Mohs surgery which gives patients the highest cure rate with the smallest defect. There is no guess work involved as our highly-trained fellowship trained physicians check every cell of the biopsy margins. Dr. Thorpe stitched up the defect using a bilobed flap— in order to use local tissue that still has a blood supply and have the same coloring and contour in order to look the very best after healing. A graft from another part of the body would look like a patch on a quilt.

Now, about a year later, Susan’s nose is looking good and she enjoys golfing and enjoying life. The chance of this coming back for Susan is less than 1 in 100!