Kids often grow out of eczema, so why treat it?  Ada West Dermatology’s Pediatric Dermatologist explains the consequences of untreated atopic dermatitis.

Sure, eczema will resolve itself in 4 out of 5 kids by age 8, but that doesn’t mean it should not be treated.  It’s super uncomfortable and, when untreated, can have domino effect with serious consequences.  Dr. Swanson explains the studies and why you can’t just put lotion on it!   Listen and share with your friends.  Chances are you’ve heard similar misconceptions about the treatment or cause of what is also known as atopic dermatitis.

Pediatric Dermatologist, Lisa Swanson, MD, FAAD, is an active lecturer at national conferences discussing pediatric dermatology with clinical audiences across the country.  She practices at Ada West Dermatology in Meridian and Boise, Idaho.

Here is the transcript:

Eczema is a really common skin condition, especially in kids, but adults can have it too. It’s something that I see every single day. In fact, probably I would say 25% of my day is spent talking to patients and their families about eczema, so it’s very, very common. On one side of things, I can give people some helpful, optimistic information about outgrowing eczema, because statistics tell us that four out of five kids will eventually outgrow it by age eight. That’s exciting, and that is good, but it doesn’t mean that all kids outgrow it. It doesn’t mean that we shouldn’t treat it because eczema is super uncomfortable and can affect a lot of different aspects of a patient’s life.

Eczema will affect sleep in a major way

The itch of eczema is extreme and severe and very uncomfortable for kids and adults that deal with it. There was a commercial for an eczema drug that featured fire ants crawling all over a patient’s hands and one of my patients said, whoever came up with that idea has eczema because that’s truly what it feels like all of the time. The itch disrupts a lot of things in a young person’s and adult’s life. It affects sleep in a pretty major way, and, in kids, that impact on sleep is huge. Not only does it impact the sleep of the child experiencing it, but it also impacts the sleep of the adults who live in the same house.

There was a study that show on average, parents of kids with eczema lose an hour to an hour and a half of sleep every night because of their child’s eczema and itching. 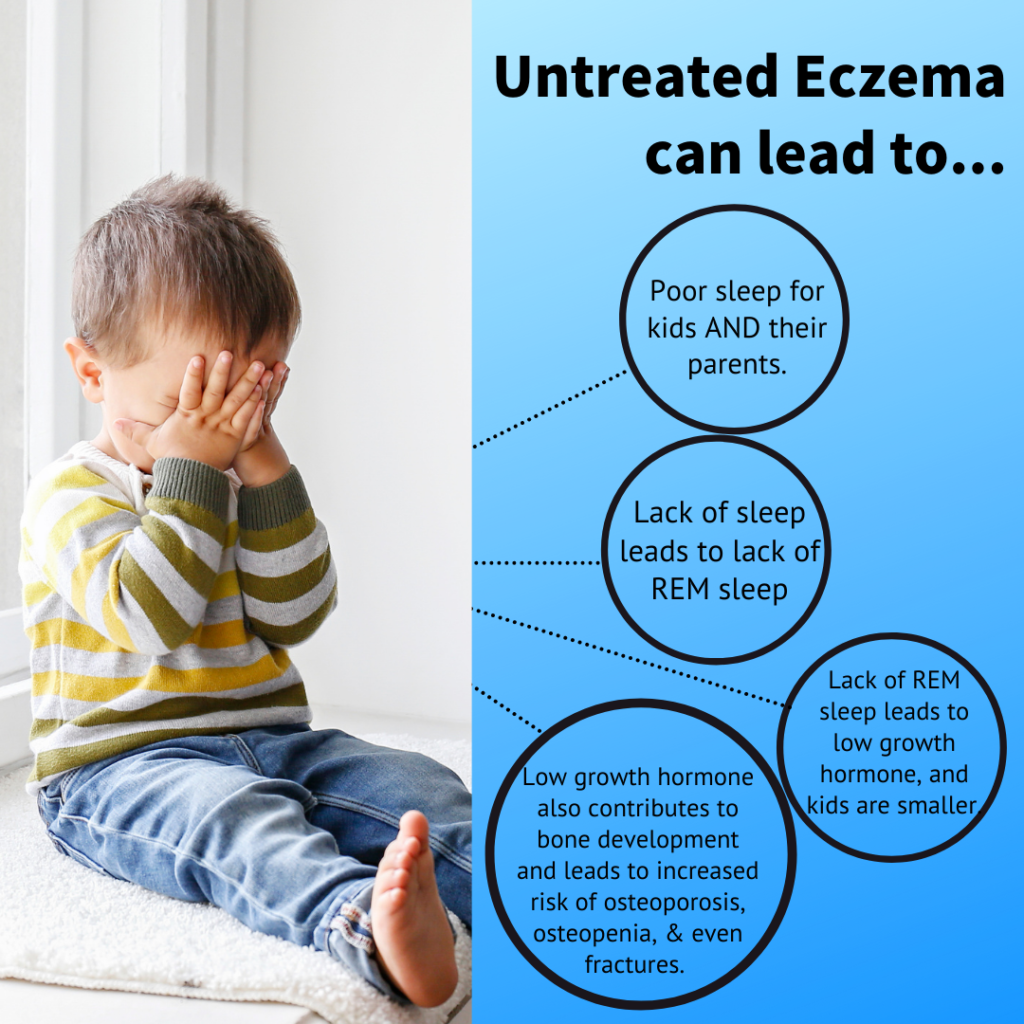 When eczemao goes untreated, both kids and parent lose sleep. The loss of sleep for children is detrimental to their growth and overall health. See the domino effect here.

In addition, we’ve long noticed that kids with eczema tend to be smaller on height and weight growth curves.  We’ve attributed that to different therapies and, and different theories. More recently, we have concrete explanations for why this occurs and it boils down to sleep.

One thing that frustrates me is when I hear from patients and their families, that they asked their primary care doctor pediatrician, family medicine, doc, about their child’s eczema. They were told that it will be something the child outgrows, and it’s nothing to worry about and they don’t need to do anything. And just go ahead and put lotion on it. This frustrates me because, while it is true, that statistically a good percentage of kids with eczema will outgrow it, they are suffering and struggling now, so I want to treat them and make them feel better NOW. In addition, we now have good science to suggest and support that food allergy is actually being triggered by the eczema. A lot of people over the years have tried to blame eczema on food allergy.  Overall studies don’t support that.

However, I do believe there can be some individuals that are triggered by food, but more recent research shows that the eczema is the cause of the food allergy. Because when you have eczema, you have a broken skin barrier so aerosolized food particles are able to enter the skin. Your immune system in the skin is not used to eating food. It sees these food particles and treats them abnormally, which generates an abnormal immune response that manifests as allergy.  There’s even a study out of Japan, where they found that treating the atopic dermatitis reduced the risk of food allergy. Now we know the best way to prevent food allergy is treat your child’s eczema. So those are the two big reasons that I take issue with families being told that,  “It’s just eczema, they’ll outgrow it. You don’t need to do anything.

A) They’re suffering NOW.  I’d like to treat those patients NOW.

B) We now know that by treating it, we’re preventing food allergy.

How well do YOU know the overall health effects of eczema?  Take this quiz from the American Academy of Dermatology.